Upper extremity-specific measures of disability and outcomes in orthopaedic surgery.

These authors concluded that "Outcome measures may consist of simple questions or they may be more complex instruments that evaluate multiple interrelated domains that influence patient function. Outcome measures should be relevant to patients, easy to use, reliable, valid, and responsive to clinical changes."

In order to be practical, the outcome instrument must be quick, inexpensive to apply, free from inter-observer variability, and reflective of the patient's view of the comfort and function of the shoulder. It is important that the instrument be applicable independent of the location of the patient and not require that the patient return to the office for evaluation. It was with these attributes in mind that the Simple Shoulder Test (SST) was developed. It has now been used in well over 400 peer-reviewed publications in different languages and in many different countries. It is inexpensive, easy for patients to comprehend, and can easily be used for tracking the results of treatment over time.

The topic of outcome questionnaires recalls an editorial in the JBJS and our response to it, which is reproduced here:

To The Editor:
The editorial "Are Validated Questionnaires Valid?" (2005;87:1671-2), by my respected colleague Bert Zarins, was a provocative piece. While what he says rings true, there are other aspects to the "validity" issue that should be added to our thoughtful consideration. I will enlist the help of another Massachusetts General surgeon who is often, but incompletely, quoted:
"Already in 1900 I had become interested in what I have called the End Result Idea, which was merely the common-sense notion that every hospital should follow every patient it treats, long enough to determine whether or not the treatment has been successful, and then to inquire `if not, why not?'... We had found that this routine tracing of every case, interesting or uninteresting, had brought to our notice many things in which our knowledge, our technique, our organization, our own skill or wisdom, and perhaps even our care and our consciences, needed attention."1 When he presented this idea in 1913 in the great hall of the Philadelphia Academy of Medicine, Codman pointed out that answering these questions is of primary interest to the patient, the public, and those in the medical field. He then asked, "Who represents or acts for these interests?" and answered, "Strangely enough the answer is: No one."1 In his infamous cartoon of the "Back Bay Golden Goose Ostrich," he showed the bird producing golden eggs of profit while hiding her head in the sand so she could not see how much (or how little) the care was benefiting the patient1. For his insolence, he was fired from the hospital.
A century later we are struggling with the same issues. 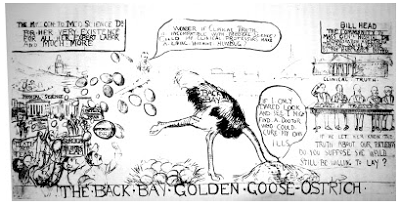 ==
Use the "Search" box to the right to find other topics of interest to you.


See the countries from which our readers come on this post.
Posted by Frederick A. Matsen III, M.D. at 6:19 AM