We recognize that the primary mechanism of failure of cuff repair is the sutures pulling through the tissue of the tendon. While other mechanisms (suture stretch, suture breakage, knot failure, and bone failure) can occur, they do not seem to be nearly as much of a problem as pull-through.  Now common sense would suggest that the load necessary to cause pull-through of each suture passed through a tendon is primarily dependent on the quality of the tendon. Thus if the quality of the tendon is uniform (as was probably the case in this model) and if the nature of pull allowed for each suture to be loaded equally (as was probably the case in this model), twice the number of sutures should be able to withstand twice the load. This expected linear relationship is demonstrated by our graph of the authors' data shown below. 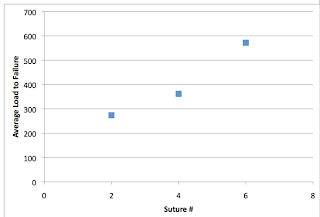 Even though we know that the quality of tendon is not uniform in a clinical cuff tear, it does stand to reason that more sutures will do a better job of distributing the load applied to them so that there is less load per suture. The load per suture can also be reduced by not repairing the cuff under tension and by immobilizing the arm in some abduction after surgery.

Thus, even though this is an oversimplified repair situation, it does make the point that more is more.

There is another issue to be raised, however. The infraspinatus, in animal or man, has a relatively uniform direction of pull. By contrast, the most commonly torn human tendon, the supraspinatus, lies on the top of the shoulder so that its directions of pull vary with shoulder position. These changes in shoulder position result in differential loading of the sutures as demonstrated by Howe et al, the abstract of which is reproduced here:

Differential suture loading in an experimental rotator cuff repair.
BACKGROUND:
Repairs of large rotator cuff tears often fail to heal. A possible factor in these failures is excessive tension in the repair sutures, causing them to pull through the tendon.

HYPOTHESIS:
Arm positions encountered during early rehabilitation after cuff repair can dramatically increase the relative tension in the different sutures of the cuff repair.

STUDY DESIGN:
In a human cadaver model, a 4-suture supraspinatus repair was carried out with transosseous sutures. After the repair, the arm was placed in 12 different positions. The tension in each suture was monitored using individual load cells.
RESULTS:

CONCLUSIONS:
This study is the first report of direct suture tension measurement after a model rotator cuff repair. In this model, 30 degrees of either internal or external rotation of the arm in relation to the plane of the scapula created substantial imbalances in the tension between the most anterior and most posterior sutures of a supraspinatus repair, regardless of the position of abduction.

The final issue with the recent JBJS article is that one of the authors'  failure endpoints was formation of a gap at the repair site of 20 mm - i.e. two centimeters!! We suggest that failure of cuff healing is likely with much smaller gaps separating the tendon from the bone. 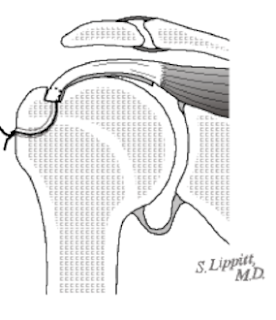 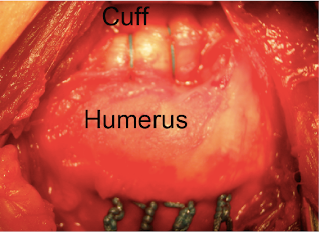