Before embarking on a surgical revision to regain motion, it is important to determine the cause of the residual stiffness.  Previous operative notes are reviewed to discover if the joint was intentionally tightened and if so how this was carried out.  Particular note is made of whether the subscapularis was advanced lateral to the bicipital groove and whether thermal or laser capsular cauterization was carried out.  Excellent anteroposterior and axillary radiographs are needed to exclude bony or articular causes of shoulder stiffness.  The location of hardware and other implants is determined. 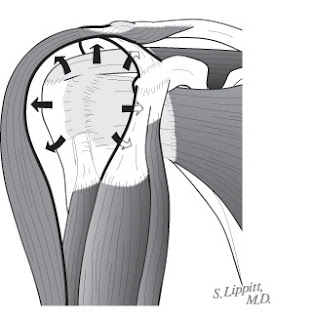 The surgical procedure is performed sequentially, with the range of motion being reexamined after each step of the release.  When the desired range is achieved, the procedure may be concluded. The initial step is to completely free the humeroscapular motion interface.

Any prominent suture, suture anchors, hardware, bone or soft tissue is resected from the proximal humerus to assure smooth passage within the coracoacromial arch.  A nerve-to-nerve release is performed. 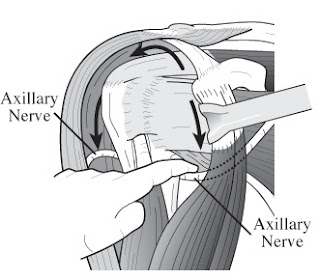 The second step is to incise the coracohumeral ligament from around the coracoid process. 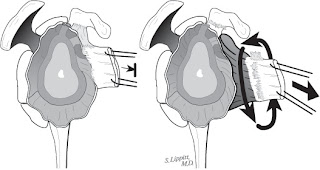 In this release the anterior capsule is incised just lateral to the labrum, leaving the labrum on the bony glenoid to maintain the glenoid concavity.  After the release, the subscapularis should have a nice ‘bounce’ when traction is applied to it.  Recall that if the subscapularis is to allow a range of rotation of 115 degrees (two radians) it must have an excursion of twice the radius of the humeral head.  Thus, if a humeral head has a radius of 25 mm, a subscapularis excursion of 50 mm will allow a 115-degree range of internal and external rotation. 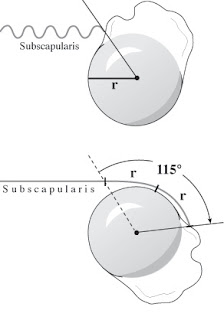 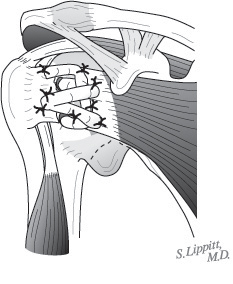 If the long head tendon of the biceps does not slide freely in the bicipital groove, the adhesions in the groove are released.  If freedom cannot be achieved, the tendon is incised at its insertion to the supraglenoid tubercle and tenodesed to the proximal humerus in its groove. 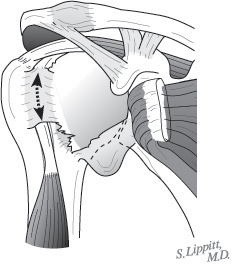 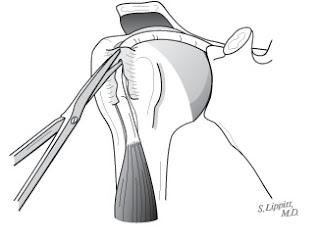 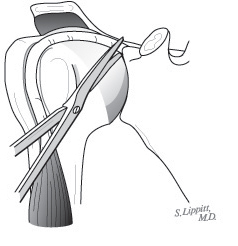 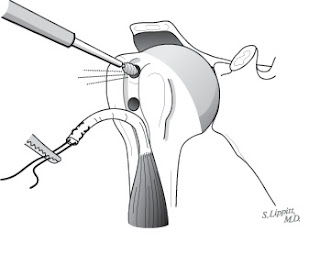 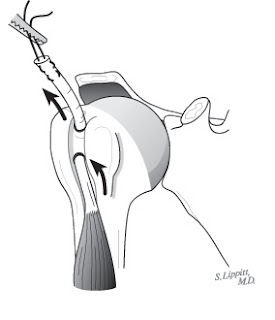 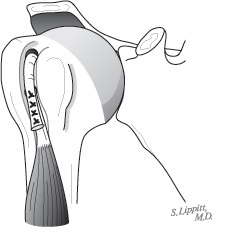 The next step is, while protecting the axillary nerve with the non-dominant index finger, to release the inferior capsule from the inferior glenoid labrum. 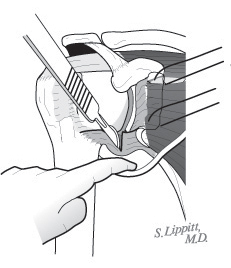 Inserting a humeral head retractor into the joint and rotating its inferior aspect away from the glenoid puts the inferior capsule under tension, facilitating this release.  The anterior and posterior bands of the inferior glenohumeral ligament are released.  Exposure of the origin of the long head of the triceps signals a complete release.

The articular aspect of the joint is inspected and any bony prominences that potentially block motion are resected.  Note is made of the condition of the glenoid and humeral joint surfaces.

Finally, the posterior capsule is released from the posterior glenoid labrum. The capsule is placed under tension by rotating the humeral head retractor away from the glenoid, first inferiorly and then superiorly. 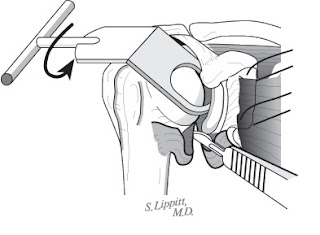 At the conclusion of the procedure, the shoulder is put through a full range of motion.  The subscapularis tendon is closed robustly to the lesser tuberosity so that immediate, postoperative motion maintaining exercises can be implemented.

See the countries from which our readers come on this post.
Posted by Frederick A. Matsen III, M.D. at 2:00 PM