The authors observe that as many as seventy percent of rotator cuff repairs demonstrate a recurrent defect after attempted repair. In 14 patients having arthroscopic cuff repair of tears ranging from 2-4 cm they inserted tantalum markers in the repaired tendon to measure the prevalence, timing, and magnitude of tendon retraction after rotator cuff repair and correlated the retraction with formation of a full-thickness recurrent tendon defect on magnetic resonance imaging and with clinical outcomes.

The postoperative protocol was prospectively defined to include use of a sling or small abduction pillow for 6 weeks. Patients were allowed use of the operative arm at waist level for simple activities of daily living. Active range of motion or weighted use of the arm for lifting, reaching, pushing, or pulling was restricted during the first 6 weeks.

All repaired tendons retracted away from the position of initial fixation during the first year after surgery (mean [standard deviation], 16.1 [5.3] mm; range, 5.7-23.2 mm), yet only 30% of patients formed a recurrent defect. Patients who formed a recurrent defect tended to have more tendon retraction during the first 6 weeks after surgery (9.7 [6.0] mm) than those who did not form a defect (4.1 [2.2] mm) (P = .08), but the total magnitude of tendon retraction was not significantly different between patient groups at 52 weeks. There was no significant correlation between the magnitude of tendon retraction and the Penn score (r = 0.01, P = .97) or normalized scapular abduction strength (r = -0.21, P = .58). Shoulders with a recurrent defect tended to have lower Penn scores at 52 weeks but this was not statistically significant (P = .1).

"Failure with continuity" (tendon retraction without a recurrent defect) appears to be a common phenomenon after rotator cuff repair. The authors suggest that repairs should be protected in the early postoperative period and repair strategies should endeavor to mechanically and biologically augment the repair during this critical early period, but the efficacy of these approaches remains to be demonstrated.

It was also of interest that the degree of retraction tended to be greater for bigger tears, as shown below in a plot we made from the authors' data. 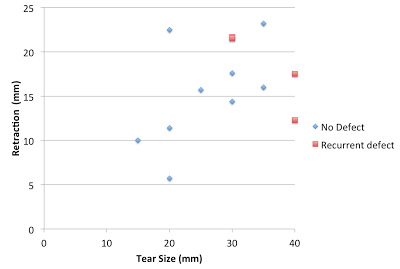 This suggest that the retraction observed after repair may be related to "stress relaxation" as we previously proposed - in other words, the repair of a tendon defect places supraphysiologic load on the repaired tendon. Over time, this load is reduced by retraction of the tendon away from the site of its surgical re-insertion until the tension in the tendon is within physiological limits. If this is correct, it suggests that attention needs to be directed at minimizing the tension of the repaired tendon by releases and by avoiding the temptation to 'pull the tendon tight' to a lateral insertion site.


See the countries from which our readers come on this post.