Failure of rotator cuff repair, when does it happen and what difference does it make?

The goal of the surgical repair of a rotator cuff tear is to re-establish the integrity of the tendon attachment to the humeral tuberosity. Failure of tendon healing can be demonstrated as a fluid-filled defect within the tendon on magnetic resonance imaging.

These authors followed 113 patients (age range 12 (!) to 75 years) having a standardized arthroscopic repair of a full-thickness tear of 1 to 4 cm with sequential MRI studies from 2 to 52 weeks after repair. Interestingly, the authors state that "At the time of enrollment, patients had a nearly normal active range of motion—i.e., at least 140° of lateral elevation (abduction), forward flexion (elevation), and scapular elevation (abduction in the scapular plane)." All tears were repaired with the suture bridge technique (double-row transosseous equivalent) with use of metal anchors medially (average # 2) and knotless anchors laterally (average # 2).


A recurrent tear was noted in nineteen (17%) of the 113 patients within one year after surgery. Interestingly, this retear rate at 1 year using 'modern' repair techniques is not different than that reported for the the open repair of similar tears at 5 years reported previously by Harryman et al. The mean time to the retear was 19.2 weeks, with most retears noted between six and twenty-six weeks after arthroscopic rotator cuff repair. Half of the retears occurred between twelve and twenty-six weeks after surgery. The authors did not identify significant risk factors for re-tear. 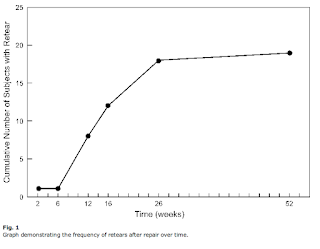 As has been the case in previous studies, the presence of a retear was not correlated with a difference in shoulder outcome scores, including the normalized Constant-Murley Shoulder Score, VAS pain score, or Penn Shoulder Score at the time of final follow-up.

Based on their data, the authors conclude that rotator cuff repairs should be protected for at least six months.  This is important because this recommendation for 'down time' adds substantially to the cost of rotator cuff repair.

===
Use the "Search" box to the right to find other topics of interest to you.


See the countries from which our readers come on this post.
Posted by Frederick A. Matsen III, M.D. at 6:29 AM