An elderly patient had a hemiarthroplasty for fracture one year ago.  She presented to our clinic with pain and instability. On exam she had anterior superior escape and pseudoparalysis. She desired revision to a reverse total shoulder. 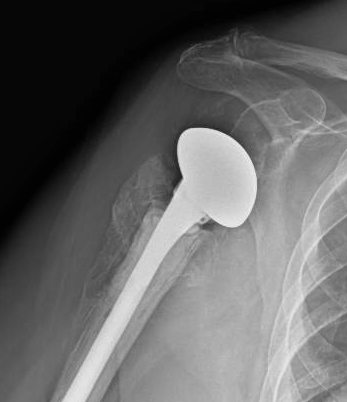 The long humeral stem was well fixed with a large cement mantle. Removal of this stem from her thin bone would require a humeral osteotomy as shown here which would have complicated the stabilization of the humeral component of a reverse humeral component.

Thus, our plan was to try to preserve the stem and convert it to a reverse. Antibiotics were held for cultures, although there was no obvious evidence of gross infection. The humeral head was removed and the modular collar was removed. The humeral stem was well fixed.


There was significant scar tissue present in the wound limiting access to the glenoid. The soft tissue around the proximal humerus was released circumferentially and released from the inferior glenoid to gain excursion of the humerus distally. This exposure was difficult because of the fixed prominence of the humeral prosthesis.

The native glenoid was covered in fibrous tissue, which was debrided and reamed to a stable base.

One the exposure was sufficient, the glenoid component was inserted followed by the proximal humeral component of the reverse. We were fortunate that the shoulder could be stably reduced.

The patient is placed on the yellow protocol until culture results are final. Exercises will be started after six weeks of sling immobilization. 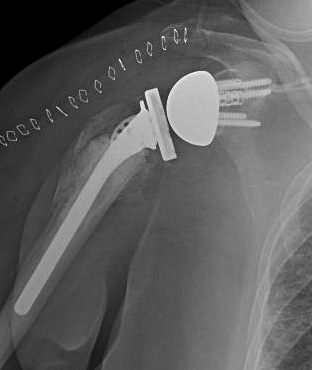 Comment: As we pointed out two blog posts ago, this case points out that the need for difficult conversion can often be avoided by performing a primary reverse for major displaced fractures of the proximal humerus in older individuals if the tuberosities cannot be stably reconstructed - obviously the case here. A second point is that conversion without humeral component removal is desirable, but difficult and the success of the conversion depends on being fortunate enough to have soft tissue balance without flexibility in the placement of the humeral and glenoid components of the reverse.
Finally, revision surgery of this type requires the surgeon to become familiar with arthroplasty systems foreign to his/her practice. There were many nuances of this prosthesis that we had to learn 'on the fly'.

===
Consultation for those who live a distance away from Seattle.

To see the topics covered in this Blog, click here

You may be interested in some of our most visited web pages including:shoulder arthritis, total shoulder, ream and run, reverse total shoulder, CTA arthroplasty, and rotator cuff surgery as well as the 'ream and run essentials'
Posted by Frederick A. Matsen III, M.D. at 5:12 AM