The July issue of JSES has several articles of interest.
The first is a study in cadavers: Bone cement penetration pattern and primary stability testing in keeled and pegged glenoid components points out that the more osteoporotic the bone of the glenoid, the more cement can be pressurized into it. While this result is intuitive (porous bone accepts more cement), it has some important implications. As we've show previously, more cement generates more heat as it sets up and more heat can kill bone and dead bone can contribute to loosening of the component. From the figures in this article, it appears that the authors vigorously reamed the bone of the glenoid, perhaps removing much of the firmer cortical bone that lies at the joint surface. We strive to preserve as much of this bone as possible in all cases, but especially in those with soft bone.

A second issue is that these authors state that they tested "primary" stability of the component. But rather than studying the common failure mode: the 'rocking horse', they used direct pull-out, which is a mechanism that is not possible in the living shoulder.

Further, in these 'stability' tests, they found that the components were pulled out of the cement mantle. As the examples below of the many loose glenoids I've retrieved show, this is not the mode of failure in living patients. Instead, glenoid components fail in the clinical situation at the cement-bone interface because the bone around the cement gives way. 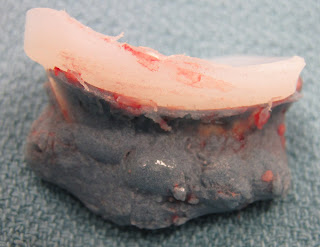 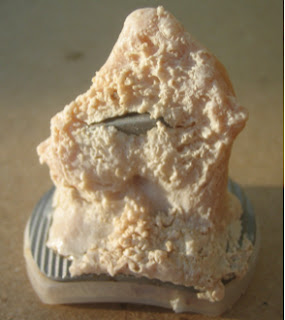 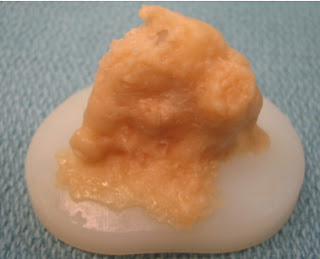 Finally, there is a lot to be said about cement technique. The authors state that they used "3rd generation" cementing technique.  Cementing in a cadaver without bleeding is quite different than cementing in a living, bleeding bone. Cement pressurization is easier in cylindrical holes for a pegged component rather than an irregular keel hole. Placing cement on the surface of the bone beneath the prosthesis may offer greater 'initial' stability in cadavers, but this thin layer of cement is subject to fatigue cracking in the living patient.

The bottom line is that even though this is a well-done cadaver study, the clinical application of such cadaver studies must be made cautiously.

---
Next an article entitled, The prevalence of shoulder osteoarthritis in the elderly Korean population: association with risk factors and function, showed that in Korea the risk of OA increased with age and with the co-existence of knee arthritis.

---
Our UK colleagues found that Venous thromboembolic events are rare after shoulder surgery: analysis of a national database. Specifically after total shoulder replacement, the rates of deep venous thrombosis, pulmonary embolism, and death within 90 days were, respectively, 0%, 0.2%, and 0.22%. These rates were not changed by the implementation of thromboembolic prophylaxis. As a result the authors suggest that such prophylaxis may not be necessary.

---
Finally, Shoulder arthroplasty in hemophilic arthropathy demonstrated that satisfactory results could be obtained with this complex condition, but that the support of a hematologist was recommended.

See the countries from which our readers come on this post.
Posted by Frederick A. Matsen III, M.D. at 2:25 PM