The subject of propionibacterium infections continues to become more interesting and complex.

As shown in this link, the genetics folks are identifying more and more strains of this organism and have assigned the new name "Cutibacterium" to the group of Propionibacteria that are found on and in humans. This includes what we used to call P. humerusii (7 different strains), P. namnetense (1 strain), P. acnes (114 strains), P. avidum (3 strains), P. granulosum (2 strains). Lots of players in the game.

The phylogenetic tree analysis showed a clear separation of the 'cutaneous' organisms (which include those we've recovered from revised shoulder arthroplasties) from the other strains below the blue line. 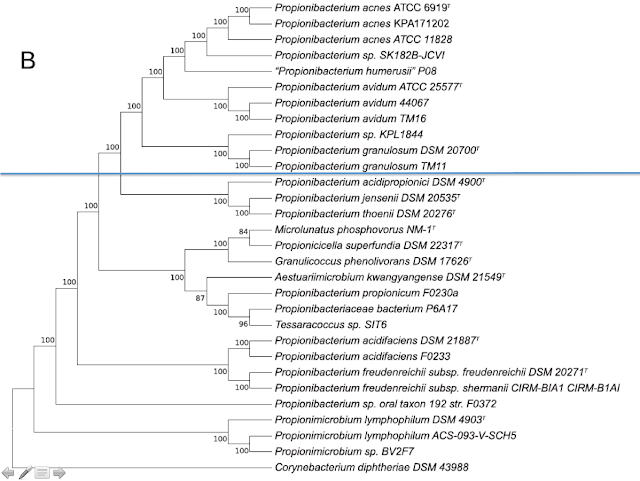 The DNA G + C content for the 'cutaneous' strains (between the blue lines), was also distinct from the others as shown below 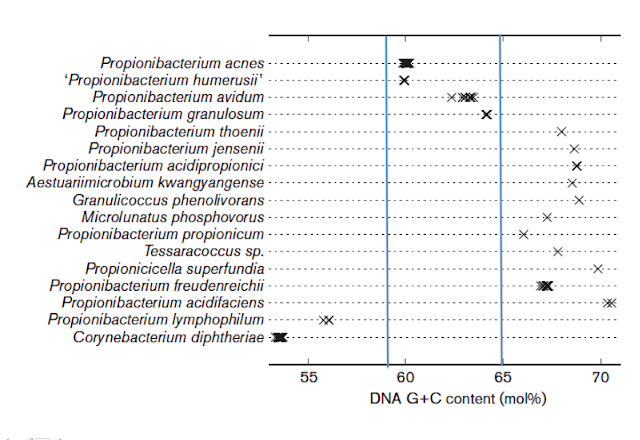 So, in spite of our original shock at having the name of our most perplexing bug changed, we can see the logic.

The other news is that these bugs can find their way into discs without being introduced by interventions.

Increasing number of studies on nuclear tissue from herniated discs demonstrating the presence of low virulent anaerobic microorganisms, predominantly Propionibacterium acnes as first reported in the Lancet in the absence of prior injection or surgical intervention (see this link). The presence of these organisms is associated with Modic changes (MC) in adjacent vertebrae. In a recent study (see this link) that confirms the findings of five previous studies: up to half of patients undergoing surgery for a first time disc herniation have infected extruded nucleus tissue, which is normally sterile. The microorganism predominantly identified was the bacterium P . acnes ). The findings of this study could be interpreted as supporting the theory that the occurrence of MCs Type 1 in the vertebrae adjacent to a previously herniated disc might be due to oedema surrounding an infected disc hence the discs that were infected with anaerobic bacteria were significantly more likely to develop MCs than those in which no bacteria were found.

A recent experimental study (see this link) indicates that Modic changes can be associated with P. acnes in the conjunction area of the disc and subchondral bone. The authors suggest results may be useful for understanding the underlying mechanisms of Modic changes and related pain. 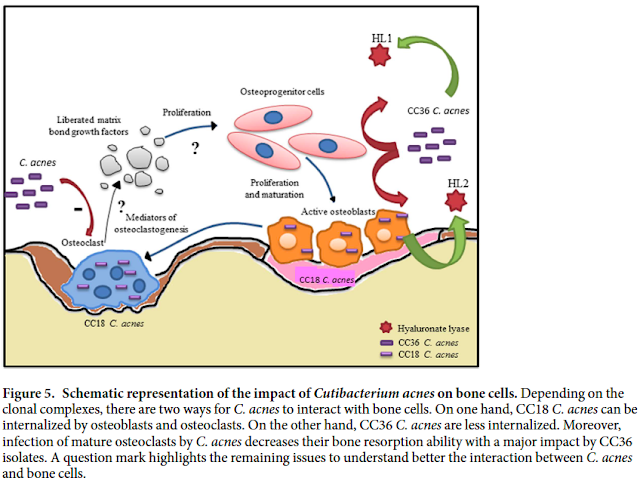 The introduction of this article is interesting to read, "Bone is a mineralized tissue constantly remodeled under the simultaneous coordinated action of three cell types: bone matrix-resorbing osteoclasts, bone matrix-forming osteoblasts, and osteocytes embedded in the mineralized bone matrix. This physiological process is tightly regulated and crucial to maintain a constant bone mass in  adults. However, this balance can be impaired to favor resorption in pathological conditions, such as osteoporosis or bone and joint infection. The pathogenicity of Cutibacterium acnes has long been restricted to skin conditions. However, C. acnes is increasingly recognized as a pathogen, mainly in foreign-body infections, such as arthroplasty or spinal instrumentation-associated infections. The role of C. acnes in foreign-body infections is probably underestimated because, as an anaerobe, it needs an adapted bacterial transport system and usually a prolonged incubation time of up to 14 days for growth5. Late growth and/or growth only in enrichment media are often misinterpreted as contamination. Recognition of the pathogenicity of C. acnes in such cases is dependent on its recovery in multiple, separately collected perioperative samples from a site expected to be sterile, in association with clinical symptoms. Unfortunately, the clinical diagnosis of such low-grade infection can be challenging because these infections often mimic aseptic loosening with scarce or nonspecific clinical signs and symptoms. The absence of a gold standard for the diagnosis and accurate criteria to define foreign-body infection may explain why C. acnes torpid infections are sometimes misclassified as aseptic loosening or mechanical failure."

=====
We have a new set of shoulder youtubes about the shoulder, check them out at this link.